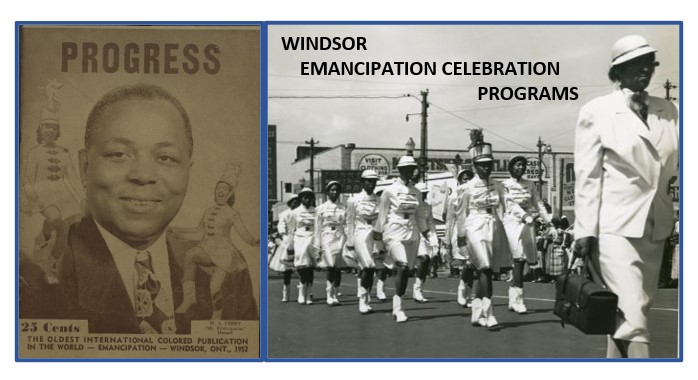 August 1st, 1834 marks the day that the Slavery Abolition Act of 1833 came into effect across the British Empire. The anniversary of this event, known as Emancipation Day, has been honoured in Southwestern Ontario since the beginning.

This collection of Emancipation Celebration programs documents the efforts of the British-American Association of Coloured Brothers*, and especially Walter L. Perry who was known as "Mr. Emancipation", to organize large scale, multi-day, international festivities in Jackson Park, Windsor. These Celebrations took place every year from 1935 to 1966. They were cancelled in 1967 due to the race riots in Detroit. As well, the main organizer, Walter Perry, died August 17th, 1967. The Celebrations were then cancelled again in 1968 due to fear of possible riots. Under the stewardship of Edmund (Ted) Powell, the Emancipation Celebrations continued from 1969 to 1983. From 1976-1982 (with the exception of 1981 when they moved back to Jackson Park), the Celebrations were held in Mic Mac Park, although the parade continued to take place on Ouellette Avenue. Finally, in 1983 both the Emancipation Celebrations and the parade were moved to Amherstburg.

The programs (also called Progress, from 1948 onwards) give insight into what was billed as "The Greatest Freedom Show on Earth". The Celebrations included a large parade, famous speakers such as Martin Luther King Jr. and Eleanor Roosevelt, concerts, sporting events, a Black beauty pageant, a carnival, as well as ample food and drink. Some years, the attendance reached close to 300,000 people. Despite, the resounding and unprecedented success of the Emancipation Celebrations, there were continual financial and administrative problems. Walter Perry outlines these in the programs. The organizers received little support from bodies such as Windsor City Council, the Windsor Chamber of Commerce, and the Essex County Tourist Association. Although, all races and nationalities were welcome at the Celebrations, racism clearly played a role behind the scenes.

*later called the Canadian-American Association of Black Brothers of Ontario

Printing is not supported at the primary Gallery Thumbnail page. Please first navigate to a specific Image before printing.